“Statement of HWPL announced on the 4th of September”

As North Korea’s nuclear issues are arousing all over the world the fear of wars and of the destruction of the entire globe, HWPL has announced the Statement of HWPL and has urged the citizens of all levels of society in the country ‘to participate together in the works of peace’.

The leaders all over the world are also urging for the ‘solution to peace’ in their worries about the security of the Korean Peninsula.

I’ve once seen an article in the internet which claimed that the role of a president is to make wars. But are you really aware of how awfully terrible wars are?!

I believe that the most fundamental role of a president is to prevent wars from occuring in situations where a war is about to break off. It is the duty not only of the president but of all citizens to mobilize all methods to find a peaceful solution to block any occurrence of wars.

“I am against wars. But how can world peace be fulfilled?”

The peace organization most needed at this point is the very ‘HWPL’.

HWPL(chairman Man Hee Lee) has made 25 peace tours around the globe and has met present and former presidents, politicians, and journalists of each country, transcending the barriers of ethnicity, religion, and nationality. With them, the implementation of an international law for world peace was promised.

The 10 articles and 38 clauses of the ‘Declaration of Peace and Cessation of War(DPCW)’ contain contents such as, ▲prevention of all aggressive wars ▲prevention of the production and support, recommendation, and inducement of the production of biochemical weapons and nuclear weapons, and weapons that go against the regulations of the International Humanitarian Law ▲measures for the gradual dismission and abolition of weapons ▲cooperation of nations, etc.

“The seemingly-unreachable peace can be substantially fulfilled through the 10 clauses and 38 articles of ‘Declaration of Peace and Cessation of War(DPCW)’.” 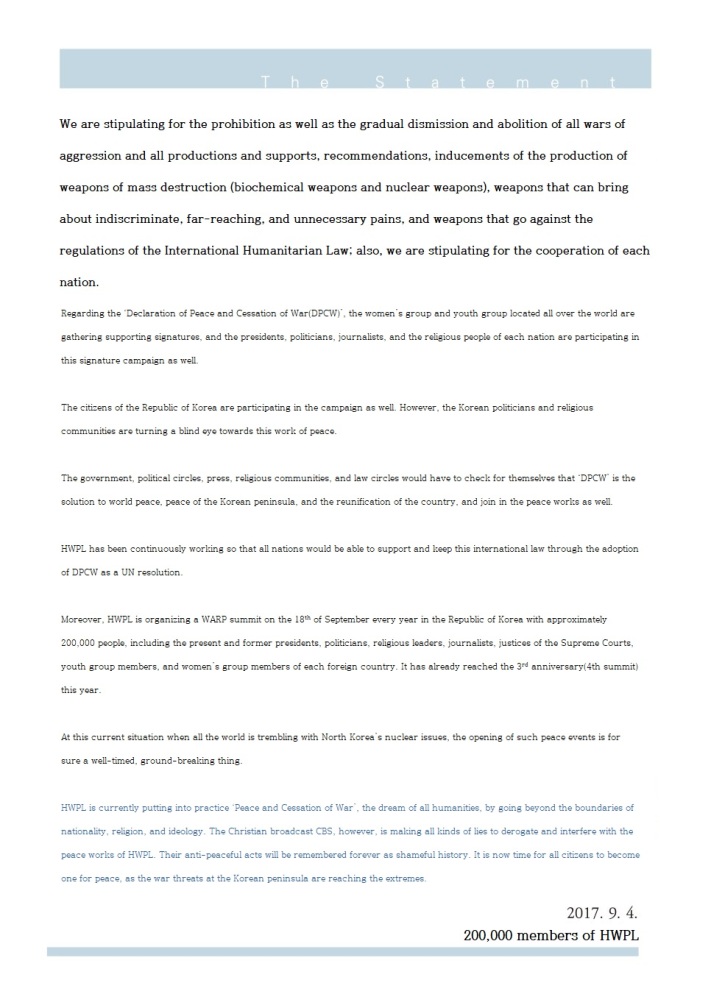 There exist two anti-peace organizations who are impeding with the peace works of HWPL even at this point where North Korea is threatening not just the safety of the nation but even world peace – these two are, namely, the Christian organization ‘Christian Council of Korea(CCK)’ and the Korean broadcasting station ‘CBS(Christian Broadcasting System)’.

HWPL is opening ‘WARP(World Alliance of Religions and Peace) Summits’ in Seoul on the 18th of September every year, informing the value of peace to all citizens of the world and practicing peace into action. Many people come gather in the summit, learn about peace, and become the cradle of peace who spread the culture of peace to all corners of the world. I hope that the government, press, legal circles, religious communities, and all citizens of the Republic of Korea would join together in the peace events of HWPL as well.